Heeeere’s Johnny! Hanging out with Mr. Depp by Ben Fong-Torres 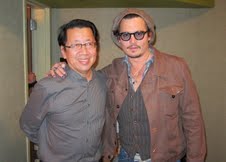 I strolled onto the stage at U.C. Berkeley’s Wheeler Auditorium after the screening of The Rum Diary, faced about 700 people and said, “Hello, I’m Johnny Depp.”

It was like being a Beatle. They knew full well who I am not, but unleashed a blend of screams and squeals, along with laughter. They could afford to be good-natured, because they knew that the real Johnny Depp was in the house.

The Rum Diary is his latest film, and it’s based on an early novel (circa 1960) by his late buddy Hunter S. Thompson. Depp, who portrayed Dr. Thompson in Fear and Loathing in Las Vegas had planned to produce The Rum Diary with him, but Hunter took his own life in 2005. Depp made it a personal mission to get this film completed.

Now, he was in Berkeley. He’d chosen to screen the film for students rather than the usual mix of media and radio contest winners. Cal offered tickets to film, English and journalism majors. Apparently, the great majority of students in those fields are female and Depp devotees.

Anyway, the publicists for the film asked me to moderate the Q&A with Johnny, and, of course, I agreed. We’d never met, but we have several bonds, and he told me of a few more. There’s Hunter, of course, from Rolling Stone days in the 70’s and beyond. And there are the Doors. I wrote a book in 2006 that was meant to be partnered with a documentary. The book beat the film by about four years, but the documentary featured narration by…Johnny Depp.

Backstage, he told me that he was a fan of my book on Gram Parsons, Hickory Wind, and knew that Keith Richards (his dear old dad in the Pirates of the Caribbean movies) had wanted to produce a film about Parsons.

On stage, once the screams died down, he, along with Bruce Robinson, The Rum Diary's writer and director, fielded a couple of questions from me, and then we invited students to take over the questioning. Most of them were good, but several coeds who’d lined up at the two microphones were there just to say they’d spoken with Depp. They didn’t really have a question. At least not one they could ask in public. Johnny was gracious about it; he’s used to this. Bruce warmed up, too.

Then, one guy claimed that he’d seen a boom mike in one shot and asked if that was intentional. Depp and Robinson told him that it was a ceiling fan he saw, but the student persisted until Depp, who does have an edge about him, asked, “What’s your f---- point?” Later, backstage, he and Robinson got into Hunter S. Thompson Gonzo mode. ”Let’s find that kid and kick him in the nuts,” said Johnny.

Robinson, before the Q&A, had told me he hated appearing in front of college students. “They’re all smartasses,” he said.

Still, the film’s promoters invited everyone to hang out afterwards at a nearby bar, Shattuck Down Low, where Depp had a favorite band set up. Its leader was Chuck E. Weiss, the real life inspiration for Rickie Lee Jones’ hit, “Chuck E.’s in Love.” Her former boyfriend, Tom Waits, who lives in the Bay Area, showed up for dinner with Depp and popped into the club.

Oddly, there was no mob scene at the Down Low. It was all very easy going. And then we realized that the great majority of the Cal students were not old enough to get in.

Behind VIP ropes, Depp enjoyed himself. We chatted some more, and he met Dianne and our nephew-in-law, Matt Pavao, an elementary school administrator and a long-time fan of Thompson’s writing. (He was a big hit with the kids the next day.) I gave Johnny a copy of The Rice Room, which includes an anecdote about the time Hunter dropped in on a Rolling Stone gathering in Palm Springs and dosed the guests with some hallucinogenic drug. I also gave him copies of photos from that evening. Evidence.

By the time I got home to San Francisco, there were four or five videos of snippets of the Q&A on YouTube, along with online reports that he jumped onstage and played with the band. By the next morning, the story was on Perez Hilton’s blog, on Hollywood Reporter, and on numerous other sites.

It’s been a long time, but it was fun hanging out with a rock star, which is what Depp is, through and through. In fact, a few days later, at the supermarket, I spotted a tabloid headline about him being seen falling-down drunk at some nightclub in Los Angeles. Fact or fiction, it’s another page in his own rum diary.

AsianConnections columnist Ben Fong-Torres is a true Renaissance man. The former Rolling Stone writer and editor is also a multiple Emmy Award-winning broadcaster, writes a column Radio Waves in the San Francisco Chronicle, and is the author of many books, including two new ones just released October, 2011: the expanded and updated edition of his 1994 best-seller The Rice Room: Growing Up Chinese American from Number Two Son to Rock 'n' Roll published by University of California Berkeley Press, and Eagles: Taking It to the Limit, an insider's look at arguably the greatest American rock 'n' roll band on the occasion of their 40th anniversary published by Running Press.

Personal Appearance Friday October 28, 2011: Ben Fong-Torres is the guest of honor at an event in Oakland, Chinatown where he grew up. $30 for a multi-course dinner, plus Sherry Hu of CBS5 interviews him, plus videos and songs. For info, try Mary Geong at (510) 654-4417 or write her at This email address is being protected from spambots. You need JavaScript enabled to view it.

Ben Fong-Torres' The Rice Room: Growing Up Chinese American from Number Two Son to Rock 'n' Roll, the instant best-seller when originally published in 1992 is released October, 2011 with and expanded and updated edition.

Ben Fong-Torres talks about his new book on CBS San Francisco October 24, 2011 Eagles: Taking It to the Limit

Click here to more of Ben's columns. His latest dated October 24, 2011 is at this link.

Footnote 10/26/2011: More of Ben's previous columns will be posted in an online archive soon as AsianConnections.com completes work on its new website system.