Ziyi Zhang, who stars in the recently released "Memoirs of a Geisha," has been nominated for best actress in the 63rd Annual Golden Globe Awards.

Ziyi Zhang, who stars in "Memoirs of a Geisha," has been nominated for best actress in the 63rd Annual Golden Globe Awards.

In the movie based on Arthur Golden's 1997 novel, Ziyi played a poor fisherman's daughter, Chiyo, who is sold to a geisha house or okiya, and through rigorous training becomes Sayuri, the top geisha in Kyoto during the pre-World War II era.

The Hollywood Foreign Press Association comprises 86 voters, most of them freelance writers for foreign publications, while the Academy of Motion Picture Arts and Sciences has 5,800 who are eligible to vote for the Oscars. The Golden Globes will be presented on Jan. 16, 2005 and televised on NBC.

Los Angeles, CA (May 11, 2007) - At a press conference held yesterday in Los Angeles, Grace Park (Battlestar Galactica), co-host of the upcoming 2007 AZN Asian Excellence Awards presented by JCPenney, announced the nominees for this year's awards presentation. The show, which honors outstanding achievements of Asian and Asian Americans, will air on AZN Television on Monday, May 28 at 8:00 p.m. ET/PT.

The nominees are as follows:

AsianConnections salutes actor James Hong for his many successful career achievements and contributions as an advocate for more and better roles for Asian Americans in the entertainment industry.

James Hong, one of Hollywood's most prolific and versatile actors turned 79 February 22nd, and he's busy as ever.

Hong is a veteran actor with more than 450 appearances in feature films, television shows, and foreign productions spanning more than fifty years. He also is a film producer.

Among his diverse roles, James has acted in critically acclaimed films such as period drama "Chinatown" starring Jack Nicholson playing Faye Dunaway's butler, in the sci-fi thriller "Blade Runner" with Harrison Ford, as the voice of Chi Fu in Disney's "Mulan," and the character Lo Pan in cult classic "Big Trouble in Little China."

James was born in Minneapolis, Minnesota on February 22, 1929. His father emigrated from China to the U.S. via Canada and started a laundry business, later owning restaurants and an upscale club catering to Caucasian customers.

By the time James was 5, Hong's father felt his son was becoming "too Americanized" so he moved the family to Hong Kong where James could attend a Chinese elementary school. 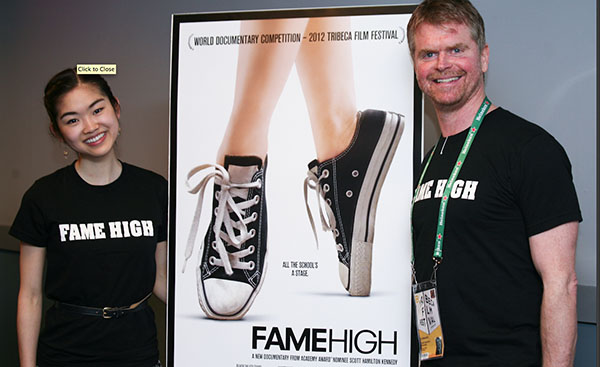 This year more than 50 films are featured from around the world.

Bay Area filmmaker James Z. Feng screens his documentary FIGHT LIFE on the mixed-martial arts world. FIGHT LIFE chronicles the struggle in the lives of three local fights from the moment of victory every fighter chases to the devastating knockout in defeat. Click here to FIGHT LIFE's trailer.

Feng told NBC's Sunday Night Sport Show that he's maxed out his credit card to make this film happen. Feng says he wants to show mixed martial arts as a sport, "I think alot of people don't understand that MMA is a sport, they kind of look at it like its a gimmick..." "My goal is to get it to the world, and I'm going to do whatever it takes to make that happen if it means that I don't make a dime from this film so be it. Its not about the money, I've put my own life on the line for this film."

Konrad Aderer's short documentary "Rising Up: The Alams" is showing on March 2 in New York.

Konrad Aderer's short documentary "Rising Up: The Alams" is showing at the 5th annual Grassroots Media Conference on March 2 at 12:15 at Hunter College in New York.

The filmmaker introduces us to the Alams, a Bangladeshi family living in Coney Island, Brooklyn. Mohammed Alam, father to two young U.S.-born daughters, is one of 13,000 immigrants facing deportation as a consequence of Special Registration, a post-9/11 policy which targeted nationals of Muslim countries. But the Alams are not just victims. Learn how they fight back as members of South Asian community organization D.R.U.M. (Desis Rising Up and Moving).

The 5th annual Grassroots Media Conference - Speaking Truth To Power- Media Justice in Our Communities is co-sponsored by the Film and Media Studies Department, Hunter College/CUNY and will take place on from 9am-6pm on Sunday, March 2.

CALL FOR CHANGE SERIES: PRESENTED BY THIRD WORLD NEWSREEL
Call for Change is a vibrant series of short documentaries about various communities of color in New York City. Each documentary opens a window into a different aspect of life in the city: a Palestinian-American voting for the first time;
Sikhs defending their civil rights to wear turbans and practice their religion; a Bangladeshi family fighting against deportation; domestic workers demanding better working conditions, and more.