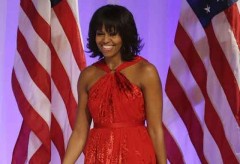 The Olympics, Ryan Seacrest and Me by Ben Fong-Torres

The Olympics, Ryan Seacrest and Me

I apologize for not writing sooner. It’s not that I haven’t been writing. Just not for this space. For example, I just had a short piece published in The Hollywood Reporter, about the Olympics’ opening ceremonies, with a focus on music. It’s in the August 10 edition of “THR,” which is an interesting blend of trade magazine (for showbiz industry folks) and consumer mag (for people who like backstage peeps at the business known as show).

My piece—about the 60’s music that producer Danny Boyle featured during that wild, wacky event—was nothing special. But one thing about it really amused me. Just below my story was a Q&A with Ryan Seacrest, who was among the talent NBC shipped to London to work the Olympics.

A few months ago, when Dick Clark died, I wrote my first article for The Hollywood Reporter, recalling a sometimes contentious interview with him from ‘way back, for Rolling Stone. The editors chose a quote of Clark, something he said to me, for the headline: “YOU’RE A LIBERAL, AND I’M A F---ING WHORE’. This, right after a glowing tribute, “What I Learned from the Master,” by…Ryan Seacrest.

We are fated to be together!

This is to say that stuff happens.

Just the other day, I was on Castro Street here in San Francisco, and a guy asks, “Aren’t you Ben Fong-Torres?” I admit that I am.

I didn’t know what to make of that—although I think I knew what he meant, about old-timers still being around—so I just asked for his name and shook his hand. I hope he found my gesture…reassuring. 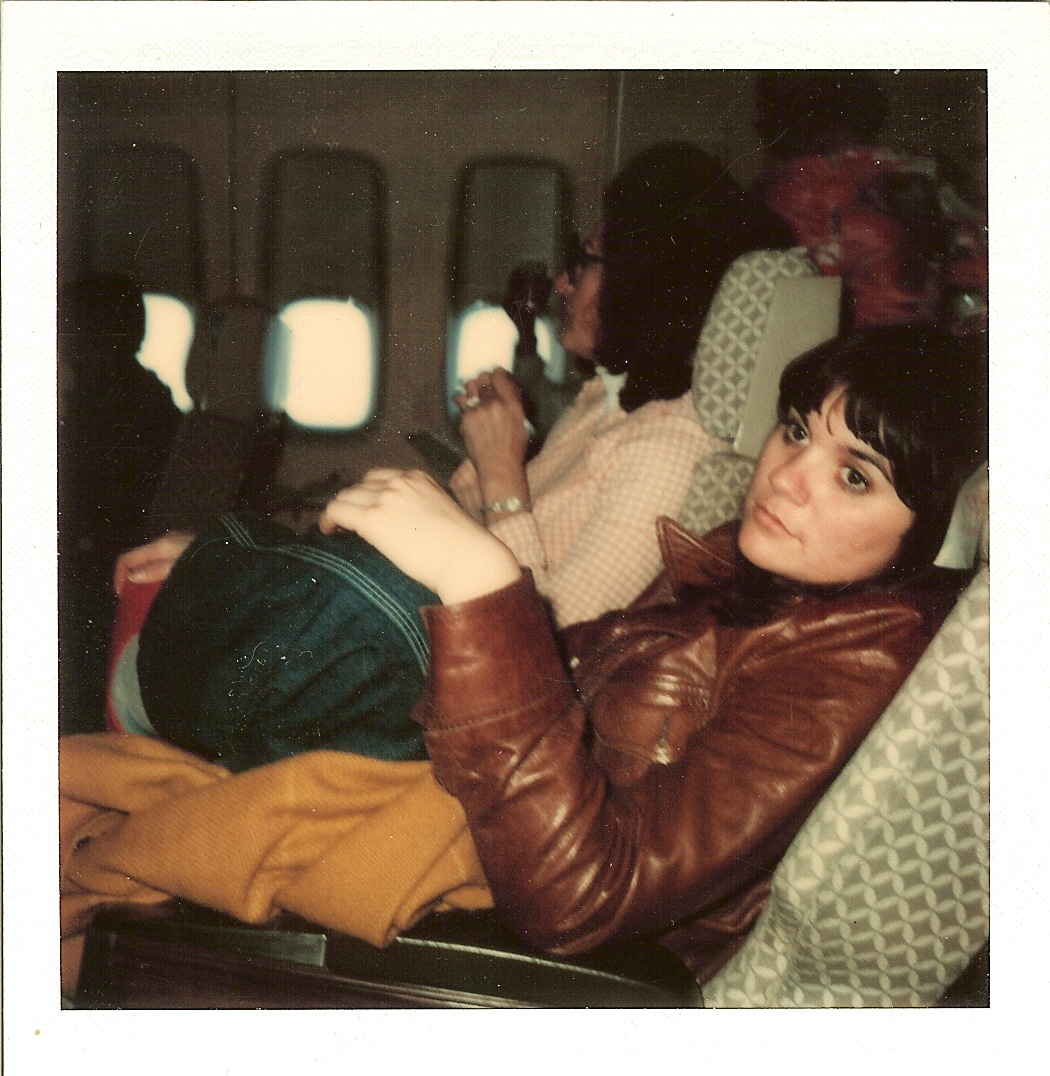 A few weeks before, at a wine tasting party, a friend asked if I’d seen the banners around town carrying my name and a quote. I had not, but went out in search of one of the signs a few days later. Sure enough, there they were, put up by San Francisco State University, my alma mater. Mine was one of several banners, flanking street light poles, featuring alumni extolling the school. Apparently, in an interview some time ago, I’d uttered something about how, at SF State, I found open doors. Didn’t matter that I was this Asian American kid wanting to get into media work when, in the early Sixties, there weren’t that many of us with such ambitions. And, now, that revelation is on display on selected streets around San Francisco. 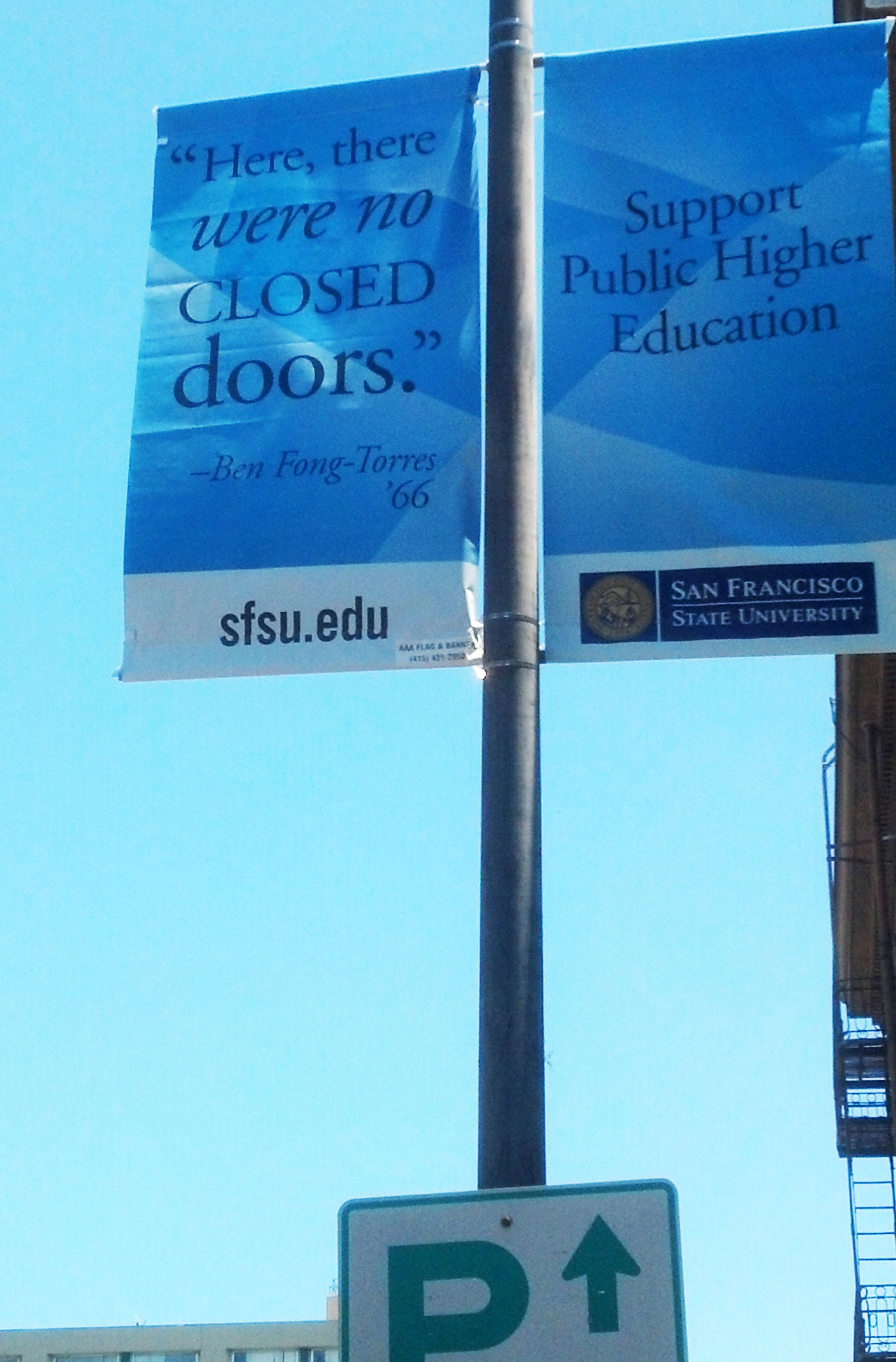 Nice. But even nicer? My banner, on Bush Street and Van Ness Avenue, was right next to one featuring Jeffrey Tambor, the actor who I loved on The Larry Sanders Show (and, later, Arrested Development). His statement: “I’m positive I’m an actor because of that place.”  And, I would add, that talent.

What else? Lots else. Dianne and I recently had Linda Ronstadt over for dinner. I’m working on a book about Little Feat, a band Linda knew well. She agreed to talk with me for my book, and, knowing that she was working on a book of her own—about her musical career—I offered to give her copies of transcripts of interviews I’d done with her  over the years, ranging from her Rolling Stone cover story in 1975 to her work with Nelson Riddle, her tribute to her father, Canciones Por Mi Padre, and her excursion into light opera with Pirates of Penzance. I gave her a choice of how to get the materials. I could mail or messenger them to her (she also lives in San Francisco); or she could pick them up. And maybe have dinner while she was at it. She selected the latter option.

And so it was that, one recent Sunday evening, I prepared a fish-in-paper dish for Linda and a pal of hers; we caught up, and she got her goods. At evening’s end, she agreed to pose for a couple of snapshots with Dianne, my wife, and me. Knowing that Linda’s a private person, I  won’t post any of the shots. Instead, I’ll share one I took of her during one of our earlier assignments. She was one of the brightest, most beautiful women I ever knew. Still is.

What else? During our exchanges about Little Feat and its founder and leader, the late Lowell George, Linda agreed to participate in the documentary of me that Suzanne Joe Kai is producing.

Which reminds me that another friend and pioneer broadcaster, Felicia Lowe, has come up with an innovative way of raising funds for her film, “Chinese Couplets,” about her mother’s emigration from China and its impact on four generations of women. Lowe is reaching out to friends by way of indiegogo, which helps artists, entrepreneurs and organizations to raise money. Check her project out at http://www.indiegogo.com/chinesecouplets.

While I’m supposed to be writing the book on Little Feat, I continue to crank out my radio column, Radio Waves, for the San Francisco Chronicle. A recent one featured an answer for any music/radio fan who’s wanted an easy and relatively low cost way to blast sounds around the house. It’s called Sonos, and my report and review is HERE.

THOUGHTS WHILE MEDITATING: Good going, Jeremy Lin. That is, for going from the New York Knicks, with whom he became a superstar, to the Houston Rockets. Not only did he get the big-money deal he deserved, he escapes New York, which is just too crowded—both on the streets and on the court, where he couldn’t co-exist with Carmelo Anthony … Sad, though, to see Kurt Suzuki leaving the Oakland A’s (for Washington). A standup guy—especially for a catcher …

Saddest of all: the news that East Bay assemblymember Mary Hayashi (Dem.- Castro Valley),  who pleaded no contest to charges of shoplifting, is running for even higher office. Hayashi, who was caught (by video cameras) taking some $2450 in clothing (mainly leather pants) out of a Neiman Marcus store in San Francisco, is running for a seat on the Alameda County Board of Supervisors. The nerve of the woman. She’s on three years of probation for misdemeanor grand theft stemming from the incident last Oct. 25, and she got off easy. Her defenses included distraction—she was texting on her two cell phones, she said—and (according to her lawyer) a small, benign brain tumor. The latter excuse was retracted quickly, but, after pleading no contest, she stated, “My medical condition may have complicated the situation.” In a recent interview, Hayashi said her health was fine. That’s wonderful, but her reputation is in tatters. And it could get even worse.

Followers of her case—and there are some avid ones—noted that the NM’s detectives had their eyes on her because a woman matching her description had been in the store a week before the incident, and tried on a dress. The garment was missing after the woman’s departure. When the assemblywoman showed up, a sales clerk alerted security, and they kept an eye (and a camera) on her. Prosecutors said Hayashi brought a bag of her own into the dressing room, and the leather pants, along with a blouse and skirt, wound up in that bag. At checkout, she failed to show those items. She said she’d just remembered them as she left the store and was about to return to pay for them when security personnel stopped her. Now, she dismisses her theft as an “error,” the result of absent-mindedness.  Now, that’s what you’re looking for in a political leader!

But here’s the thing: There’s more dirt on Hayashi (the wife of a judge, by the way) than a shoplifting incident, and if she does run, she risks more scandalous gossip and headlines. Nothing illegal; just embarrassing. But she’s built a campaign war chest of some $583,000. She can’t transfer more than 20 grand for a county campaign. Still, that’s a lot of leather pants.

MEIN ATTRACTION: On a lighter note: I’ve learned how to make chow mein. The recipe is my sister Sarah’s; she got it from a cookbook, and it’s classic Chicken Chow Mein. Living in San Francisco, I have no need to make my own, but, as Sarah noted, homemade is far superior to most restaurant versions. I was compelled to try the recipe after seeing a video of my nephew, Jason Watkins (Sarah’s son) whipping up the dish, under Sarah’s supervision. It’s quite a bit of work, and it calls for stuff like dried shiitake mushrooms, Chinese egg noodles and bok choy. But the result is a delicious and healthy meal. And, probably, leftovers. Here's a link to Jason's chow mein video.

FINALLY: Thank you to New American Media, a national network of ethnic media organizations, for including my jottings here on AsianConnections.com as part of its NAM Ethnic Media Awards, handed out at a dinner gala in July. Also, thanks to Suzanne Joe Kai for accepting on my behalf. I was out. With Ryan Seacrest. Congrats to all the winners.