Must See! RUTH: Justice Ginsburg in Her Own Words - A documentary by Oscar winner Freida Lee Mock

A Must See feature documentary film is coming to virtual theaters February 12, 2021!

RUTH - Justice Ginsburg In Her Own Words -

The film tells the improbable story of how Ruth Bader Ginsburg, who couldn’t get a job despite tying first in her graduating law class and making Law Review at Harvard and Columbia Law Schools, became an Associate Justice of the Supreme Court. It also reveals both the public and private sides of a resilient, resourceful woman who has survived the hostility of the profoundly male universe of government and law to become a revered Justice and icon for gender equality and women’s rights.

How does a person with three strikes against her rise to the highest court in the land, the U.S. Supreme Court?

How did this happen despite closed doors and legal and social barriers facing Ruth Bader Ginsburg in the 1950's?

Who made this possible? What personal, social and politial forces intersected to make this happen?

Academy award-winning Freida Lee Mock shows us the inspiring story of Ruth Bader Ginsberg as a wife, mother, and litigator for the ACLU's Women's Rights Project; as a professor; as an appellate judge, as a trailblazer in the 1970's arguing landmark gender discrimination cases before the Supreme Court, and her work as a Justice of the Supreme Court. 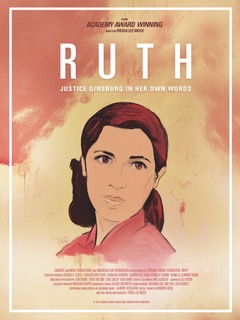