Get Ready for Henry Golding in Snake Eyes! - release Fall 2020

Hollywood January 15, 2020 Its a spin-off of Paramount's G.I. Joe series, with the central character of the masked character Snake Eyes. Henry Golding will reportedly play Snake Eyes! From his breakout role as a romantic lead in "Crazy, Rich Asians" Golding is now starring as an action star in "Snake Eyes."  The release date will be in October, 2020. 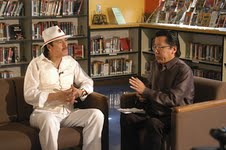 I have a life that’s ripe (and slightly wrinkled) for blogs and tweeting; for facebooking and updating.

I’m just no good at it. My last column here on AsianConnections was about the memorial in late July for my sister Shirley. My last posting on the authors’ site, Redroom, was about a radio promo tour I did (20 stops, all on the phone in my home office) for my Eagles book. On my own home page, the last thing was about hanging with Johnny Depp at UC Berkley – in mid-October.

Pathetic. But hey, when you’re busy having a life, it’s not easy stopping and writing about it -- although hundreds of thousands of people apparently do. I hear Steve Martin is an inveterate Tweeter, and he’s kind of a busy guy. But I can’t do it. Backstage with Depp, I realized that it was the perfect time to post on Twitter: “We’re about to go on stage; students are screaming already”—something like that. But Johnny and director Bruce Robinson were chatting; one must pay attention. So, no tweets from this twit.

Bottom line: It’s time to catch up, and, with apologies, to give the following events & incidents short shrift.

SANTANA: On Oct. 21, four days after the on-stager with Depp, about his movie, The Rum Diary, at Cal, I was at Mission High School, where Carlos Santana was a student in the late Sixties, soon after arriving from the streets of Tijuana, where he learned about music and life. That, he once told me, was his high school. But, at Mission High, joined by members of his band and special guests, including the great Edward James Olmos (whose stint as one of the villains on Dexter had just begun), Santana and Olmos imparted words of wisdom and inspiration to the assembled student body. Carlos advised that they find their passion. “We talk about jobs,” he said. “I never worked a day in my life, because I love what I do.” He jammed with members of Mission High’s guitar club on “Oye Como Va,” giving eight young men the thrill of their lives; then, with Olmos helping out on percussion, and with wife Cindy Blackman on fierce drums, he performed a mini-concert. He also visited classrooms, spoke with the school’s media students, and sat for a video interview with me, for his Milagro Foundation and for BAMmagazine.com to use.

Check out the BAM site; a clip of our session should be up there soon.

TAJ MAHAL: Another day, another interview: For a new series of onstage chats with musicians, the Jewish Community Center of San Francisco paired me with the great Taj Mahal, a pioneer of world music (before it got that tag): a blues player who also did doo-wop, folk, Delta blues, jazz, Caribbean, Hawaiian, and reggae, and, why not, even a Monkees song. One of his first albums in the early 70’s was called Take a Giant Step, and the title tune, which we DJ’s on KSAN played a lot, turned out to be a Carole King-Gerry Goffin song first cut by the Monkees. Taj, of course, made it his own. Although the event was advertised as an interview, he brought along a gleaming National guitar, a banjo and a mini-banjo and performed maybe five songs. The audience, including David Rubinson, producer of his seminal first albums, lapped it up, and laughed at my one stab at a joke: I was so impressed by Henry Fredericks taking on the name Taj Mahal, I said, that for a short time in the ‘70s, I changed my name to Stone Henge. Big laugh, I swear…

BLUE CHRISTMASES: On KSAN on Sundays (which is what I did when I wasn’t at Rolling Stone or on the road), I used to do this stupid DJ trick in December. I’d say I wanted to sing Elvis’ “Blue Christmas,” and, just like Presley did, kicked off the song a cappella. A line in, I’d stop and say I’d screwed up, and could we start again? And then I’d spin the record, and thousands of listeners would think (if they weren’t really thinking) that I sounded just like Presley.

That was in the ‘70s. In more recent decades, with thanks to karaoke, I’ve done “Blue Christmas” off the air, and in public. Maybe once a year, until 2011. It got ridiculous. I did it at Book Passage in Corte Madera with Kurt Huget on guitar after a reading of my Eagles book. Two days later, Dec. 6, I performed it at the holiday luncheon of the Broadcast Legends in Berkeley – my third time doing Elvis for the social group of veteran radio & TV pros. In the audience, Stan Bunger, KCBS morning co-anchor and guitarist of the Eyewitness Blues Band comprised of CBS staffers, decided I should join them the next morning in front of Macy’s downtown. They were part of a four-hour music show to raise money for the Salvation Army. With DJ Don Bleu emceeing, I wished everyone a “blue, blue Don Bleu Christmas.” A few days later, same song, different band—this time on Radio Valencia, a not exactly legal station in the Mission. DJ Quarterman Jack produces a Hillbilly Hoot, live audience and all, on the very local air and online (radiovalencia.fm). Last time out, I did Johnny Cash. This time, what else but Elvis? I also did it at a wine tasting party with friends, and, finally, on the 13th, did my annual holiday appearance for the seniors gathered for lunch and song at the Berkeley Chinese Community Church. Kurt Huget, again, on guitar; George Yamasaki on piano for maybe eight tunes, including “Silver Bells” (“as shoplifters rush home with their treasures…”) and “Blue Christmas.” Done? Not quite yet. After lunch, with George in tow, I visited my mother at Bellaken Garden, a skilled nursing facility in Oakland, and wound up doing an improv mini-show, with my Mom in the front row. And, on the eve of Christmas Eve, at Kathi Goldmark & Sam Barry’s foodfest and singalong, one last round of those blue memories.

RANDOM NOTES: Thanks to the Broadcast Legends and the California Historical Radio Society. In December, I got the Legends’ “Broadcast Legend of the Year” Award, and CHRS’s “Charles D. ‘Doc’ Herrold Award,” named after the inventor of radio. Not for any particular achievement, I don’t think, but maybe because I love radio and have enjoyed writing about it in the SF Chronicle, and elsewhere, for three decades … The Roxie Theater, an indie movie house in the Mission District, invited me to introduce its screening of the Paul McCartney doc, The Love We Make, as a fundraiser for MusiCares, the Grammy people’s charity organization. It was fun, flashing a photo of Paul and me, looking bored (or feigning nonchalance) in an office – probably in a stadium somewhere along Wings’ 1976 itinerary. The film – of McCartney in New York after Sept. 11, 2001, preparing for The Concert for New York and meeting people in Manhattan – captured the Paul I knew: always perfectly at ease, whether with Bill Clinton or raving strangers on the streets. Nonchalant – and not faking it … And speaking of strangers, I was driving up Market Street and stopped at a light when a young man rushed up, waving a CD and indicating that he wanted to give it to me. Why not? I’ve checked out several tracks and may well play one on my show on WTF, the radio station I can’t say much about, because it’s not licensed. But it’ll be on the air somewhere in Michigan. But it’s airplay, and that’s how it works. Sometimes …

FINALLY: Thanks to Lidia Bastianich and the producers of her holiday special on PBS, Lidia Celebrates America. Early in 2011, she visited San Francisco for one of the four segments that made up her show, about how different cultures celebrated holidays: Jewish, Mexican, Italian and Chinese. My sister Shirley served as her guide through Chinatown. Bastianich, well known New York restaurateur, chef and cookbook author, dedicated the program to Shirley, who passed away in June. It was very difficult to watch. But it also was good to see her again.

AsianConnections' columnist Ben Fong-Torres is a true Renaissance man. The former Rolling Stone writer and senior editor is also a multiple Emmy Award-winning broadcaster, writes a column Radio Waves in the San Francisco Chronicle, and is the author of many books, including two new ones released in Fall, 2011: the expanded and updated edition of his 1994 best-seller The Rice Room: Growing Up Chinese American from Number Two Son to Rock 'n' Roll published by University of California Berkeley Press, and Eagles: Taking It to the Limit, an insider's look at the American rock 'n' roll band on the occasion of the Eagles' 40th anniversary published by Running Press.

Join Author & Rock Icon Ben Fong-Torres
as he speaks about his history with the rise of rock n’ roll
at the Chinese Historical Society of America Museum.

The event is free with Museum Admission.
Please call (415) 391-1188 x101 or
email This email address is being protected from spambots. You need JavaScript enabled to view it. to RSVP.

Ben Fong-Torres talks about his new book on CBS San Francisco October 24, 2011Eagles: Taking It to the Limit

Click here and to links below to more of Ben's columns. His thoughts about hanging out with Johnny Depp.

Footnote 12/28/2011: More of Ben's columns will be posted soon as AsianConnections.com completes work on its new system.